Congratulations on your purchase of a Shady Plant fern!
Just a few notes on what to do now and in the future. 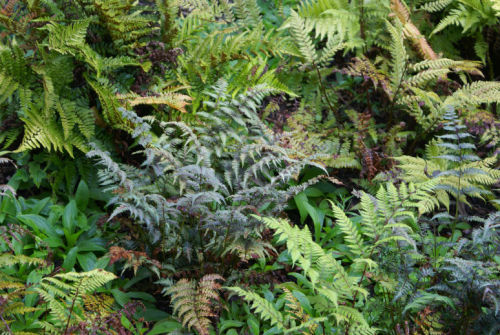 When it arrives:
When your parcel arrives remove from the box and take away other packaging such as the newspaper wrapping. If the planting site is in full shade they can be planted immediately. If the site is sunnier then place the pots in a shady spot for a day or so to aclimatise before planting. water if required.
The next step is to place the plants for planting, leave in the posts at this stage and move them around until you are happy with their position. Planting distance is mainly down to personal choice but a good rule of thumb is 5 plants per square metre, or about 45cm between plants. Dwarf or smaller varieties/species can be planted closer; larger a little further apart. Don't be afraid to palnt with other flowering plants! The photograph shows an Ostricthc Fern (|Matteuccia struthiopteris) with a Primrose, a nice example of spring colour and form.

Now you're ready for planting the first step is to prepare the planting holes. For ferns the hole doesn't have to be deep, eventual planting depth should be the soil level matching the compost level in the pot. Some species will produce a mini-trunk which is shy of the soil surface, you can plant a little deeper but make sure you leave the crown above the soil surface. Add in some organic matter, leaf mould is ideal bot home compost is just as good. For flowering plants you can use very well rotted manure as well as the other options. work the organic matter into the planting hole to encourage root growth. Once planted water well.

Maintenance:
You will be very pleased to know that you won't have to do too much! If planting in dry shade the watering policy is to drench and leave as long as possible. Give them a good soak when planting, mulch with iorganic matter (don't cover the crown) to help conserve soil moisture, and leave. Only water if the fronds start to droop, then give another good soak. Watering little and often is the wrong way to do it as this encourages roots to stay at the surface rather than searching for water nearer the water table deep down. Remeber, you are watering the soil, not the plants.
For ferns in other spots this is not as important, they do appreciate moisture and will grow fuller as a result. Soils in shade tend to stay moist throughout the year, this can be improved by an annual mulch of leaf mould, garden compot, bark mulch or bagged compost (though if using as a mulch try not to use peat based for this purpose as peat free is a much better alternative).

Pruning:
What pruning?! Seriously though ferns really need very little care. Deciduous fronds break dwon very quickly after they die down. Most evergreen ferns also drop and form a nataural mulch, howver some species may be better with old fronds removed. Do this just before new fronds emerge, especially on Polystichum setiferm and varieties. Ocasionally new fronds can get caught in these older ones. Occasionally old fronds give surprises, for instance I have a clump of Polystichum munitum which in a dry, well drained spot has old fronds coloured like burnished copper! 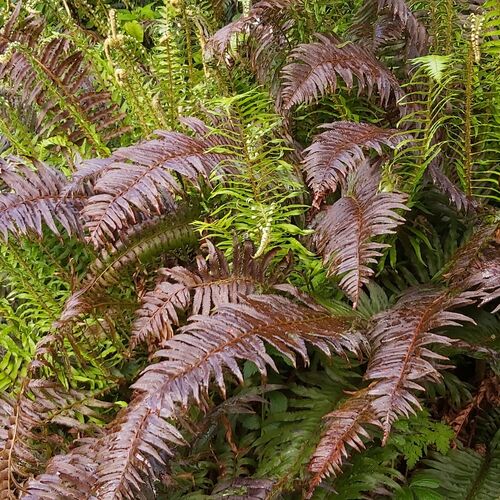 ...and that is pretty much it! Ferns are very easy to look after so sit back and enjoy your ferns. In poorer soils they will spend the first year putting their energies into the roots so don't be worried if not too much is happening up top, it's down below the soilw here the action happens. Once established they grow quickly putting on better and better shows with each passing year. they are alos long-lived plants so will give many, many years of ever increasing pleasure.
Back
Next
Previous